Following is characteristical for Hungarian heraldry:

The most common motifs of the IX and the early X centuries are the griffin, wolf and hind, and seldom figure in later Hungarian iconography and heraldic symbolism.

Another ancient element of the coat of arms is the double cross. For a long time, it was thought to have been given to Saint Stephen by the pope as the symbol of the apostolic Kingdom of Hungary. Today, the most accepted theory is that it derives from Byzantine influence, as the cross appeared around 1190 during the reign of King Béla III, who was raised in the Byzantine court. The cross appears floating in the coat of arms and on the coins from this era. Hungarian and Slovak heralds (as the symbol is also used in the coat of arms of Slovakia) have opposed the theory that the double cross is derived from Saints Cyril and Methodius.

The red and white stripes were the symbol of the Árpáds, the dynasty of the first Hungarian kings (1000-1301), and they were first used in the coat of arms in 1202 on a seal of King Emeric. This seal did not include the double cross, only the stripes, and there were nine lions on the white stripes. In the Golden Bull of King Andrew II of Hungary there were only seven lions facing each other. In the middle of the stripes linden leaves were depicted. This coat of arms was used for a short time only; Béla IV used the one with the double cross again.

The three green hills are representing mountain ranges (Tátra, Mátra and Fátra, strictly in this order). The first explanation of the hills are from a Portuguese Jesuit Antonius Macedo in his work “Divi Tutelares…” from 1687, but he didn’t name them. Later in the XVIII century, two other Jesuits József Koller in “Cerographia” and Timon in “Imago Novae Hungariae” state that three hills are: Tatra, Matra and Fatra. Timon adds, that the double cross is an ancient symbol of the Kingdom of Hungary, to which the three hills were connected.

When the House of Árpád became extinct and the Angevins came into power, they wanted to emphasize their legitimacy and their matrilineal relation to the previous royal house by using the Árpáds’ coat of arms, the red and white stripes. They combined this coat of arms with their own, using a coat of arms that resembles the one currently in use, but with the Angevins’ fleur-de-lis in place of the cross.

In the following centuries, the coat of arms of Hungary became more and more complex. It included the coats of arms of the territories which were conquered by Hungary, like Croatia, Dalmatia, Slavonia and Bosnia, but the so-called “small coat of arms” always remained the central piece.

After the revolution of 1848 was repressed, the Hungarian coat of arms was not used again until the Austro-Hungarian Compromise of 1867, when the small coat of arms with the crown once more became a part of a more complex coat of arms.

Quarterly, 1. Azure, three leopards’ heads affrontés, crowned or (Dalmatia); 2. Chequy Argent and Gules (Croatia); 3. Azure, a river in fess gules, bordered argent, thereupon a marten proper, beneath a six-pointed star or (Esclavonia); 3. per fess azure and or, over all a bar gules, issuing therefrom a demi-eagle displayed sablem addextré in chief of the sun in splendour, and senestré of a crescent argent, in the base seven towers 3 and 4, of the third ( Transylvania); enté en point Gules, a double-headed eagle proper on a peninsula vert, holding a vase pouring water into the sea argent, beneath a crown proper with bands azure (Fiume).

En surtout: an escutcheon per pale Hungary Ancient (barry of 8 gules and argent) and Hungary Modern (gules, on a mount vert a crown or, issuant therefrom a double cross argent), over all an escutcheon bearing Habsburg-Lorraine (tierced in pale Habsburg, Austria and Lorraine). Crown: Saint Stephen’s crown. Supporters: two angels. 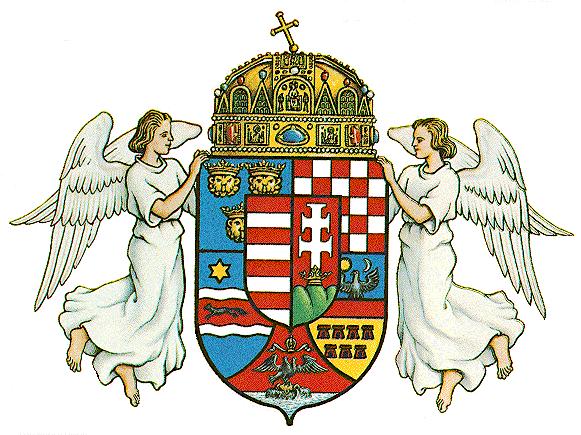 The Hungarian Soviet Republic in 1919 totally abolished the traditional coat of arms and used the communist five-pointed red star on official documents. After the fall of the Soviet Republic in August 1919, and the restoration of the Kingdom, the small coat of arms (with the Holy Crown) became official again until 1944. During the rule of the Arrow Cross Party in 1944-1945 at the end of World War II, the letter “H” (for Hungaria) and the Arrow Cross symbol were added to it.

After 1949 the Communist regime introduced a new state coat of arms in line with socialist heraldry, with a layout closely resembling that of the Soviet Union’s.

The current coat of arms of Hungary was adopted on July 3, 1990, after the end of communist rule. The arms have been used before, both with and without the Holy Crown of Hungary, sometimes as part of a larger, more complex coat of arms, and its elements date back to the Middle Ages.

The shield is split into two parts:

The sinister (right side from the viewers point) consists of a silver double cross on red base, situated inside a small golden crown, the crown is placed on the middle heap of three green hills, representing mountain ranges (Tátra, Mátra, Fátra). The dexter (left side from the viewers point) features the so-called Árpád stripes, four silver and four red stripes. It is sometimes said[by whom?] that the silver stripes represent four rivers (Duna, Tisza, Dráva, Száva).