The use of heraldic insignia as a symbolic representation of families did not develop in Byzantium. The broad range of images (Christ, the Virgin, the Cross, various saints) found on seals are personal rather than familial. Certain blazons have, however, been interpreted by some scholars as official imperial or familial coats of arms. Not until after the restoration of 1261 and the reign of the Paleologues can one find any trace of heraldry. After that date, the Byzantine court was much more open to importations from the West, for example tournaments. The Paleologues became allied with a number of prominent Western dynasties; this may have also contributed to their adoption of armorial bearings. The use then spread to the Greek nobility. In any case, this Byzantine heraldry of the 14th and 15th centuries remained marginal. 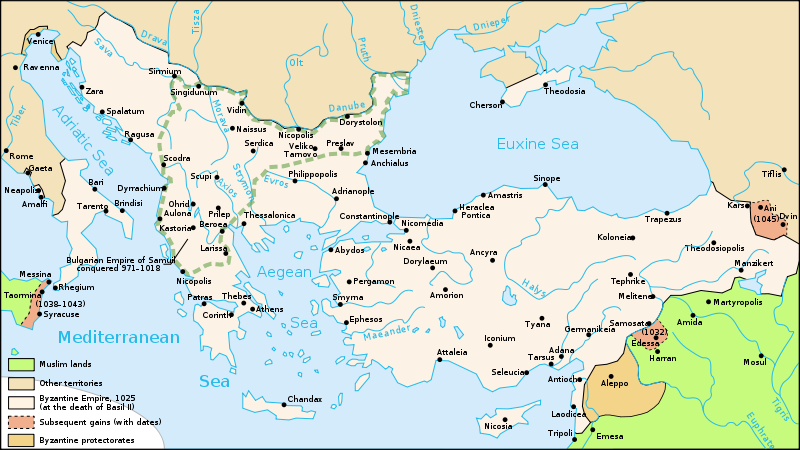 Two particular insignia have attracted a lot of attention, namely the double-headed eagle and the “tetragrammatic cross” (cross between 4 B’s).

First, the eagle: it appears as a decorative motif at the court of the last Comnenoi and the Ange family (12th c.), on the cermonial costumes of members of the imperial family but not on the emperor himself. The same is true of the court of the Laskaris in the empire of Nicea (1204-61). The Crusaders have used the double-headed eagle as symbol of the empire, although the arms of the empire itself were: Gules, a cross between four crosslets or inscribed in an annulet each and between four crosslets each, all or. The double-headed eagle was taken back to Western Europe by two daughters of the first Latin emperor, one who struck coins in Flanders with the eagle, the other marrying into the house of Savoy and bringing the eagle in the Savoy achievement.

Even after the restoration of the empire and the Paleologue emperors, the eagle is still used by the imperial family but not the emperor. The first known use is in 1301. In the 14th c. the Paleologues used either a single-headed or double-headed eagle as emblem, settling on the double-headed eagle in the 15th c. But it always remained outside of the shield. The exceptions occur in Western documents: Ulrich von Richental’s Conciliumbuch describing the arms of the participants in the Constanz council of 1414-18 is one. As for the other, in August 1439 John VIII Palaiologos conferred upon Giacomo de Morellis, a citizen of Florence, the right to place on his banner the imperial blazon (semeion); a painted representation of a shield gules with a double-headed eagle or on the document is probably a posterior addition. Thus the eagle was probably never thought of as a charge, which explains the tradition of the former imperial families (as well as states such as Serbia) of placing their arms on an escutcheon on the breast of the eagle.

As for the tetragrammatic cross, even though it was considered at the time by some to be the arms of the Paleologue family, it was in fact the arms of the Byzantine empire. The motif of a croos between four objects is derived from Constantine’s labarum and has long figured on Byzantine coins, since the 6th c.

The B’s of the tetragrammatic cross have been mostly interpreted as flints or firestones (purekbola in Greek), but also as letters. It is possible that they were initially letters, and later assimilated to firestones. The interpretation of the four B’s standing for the motto “Basileus Basileon Basileuon Basileonton” (king of kings, ruling over those who rule) may well be posterior.

These arms all come from Rietstap. The Angelos, Cantacuzene, Comnene, Ducas, Lascaris, Paleologue, Vatatzes families held the imperial throne at some point, and all but one display a double-headed eagle. A branch of the Paleologue family ruled over Montferrat in Northern Italy, when the title passed to the Gonzaga family (who quartered their arms with Paleologue); the latter died out in the early 18th century. As for the Comnene, they were still living in Corsica at the time of the French Revolution.

Other Arms, Flags, and Emblems