One of the brightest and most glorious periods of the history of Serbian people was a time of the rule of the Nemanjich dynasty. Called a holy because of the number of saints who were sanctified from the proud rulers of the dynasty, but also because of patronage for which Serbian Church is eternally grateful. I tried to give brief presentation of crucial moments in life of Nemanjich rulers.

Led by the House of Nemanjich, medieval Serbia reached its military, economic and legal climax.

First famous ruler and founder of the dynasty was Nemanja. He paved the way for his descendants to develop a modern and powerful medieval state. He ruled from 1170 to 1196.

His successor was Stephan Nemanja who was the first king from Nemanjich dynasty. The Serbian Kingdom was proclaimed in 1217. Nemanja’s other son was famous Serbian saint Sava known for establishment of the Serbian Orthodox Church in 1219.

After Stephan there were Radoslav and Vladislav, but their rules were short timed. Urosh was better king and therefore more celebrated among Serbs. He ruled form 1243 to 1276. His wife and Serbian queen was Jelena from France, catholic which was in vivid communication with the Pope and her French cousins, but was a devoted to her subjects in Serbia as well.

King Dragutin and later king Milutin were Urosh’s sons. Dragutin is known because he gained Belgrade, todays capitol of Serbia, for the first time in Serbian history. After he fell from the horse thinking that it was God’s punishment for mistreating of his father king Urosh, Dragutin has abdicated in favour of younger brother Milutin.

For over 40 years of government, Milutin was founder for almost 40 churches and monasteries and because of that Serbian Church sanctified him. He was military type and conqueror. During his reign Serbia gained vast territories and it was base for later conquering ventures of Tsar Dushan.

Milutin’s son Stephan Dechansky was blinded by his father’s men because of involvement in uprising against Milutin. He fled with his wife and son Dushan, later Tsar of Serbs, to Constantinople. After the death of King Milutin, Stephan Dechansky appears healed by God according to his claims. Actually, he was only temporarily blinded.

Together with his son Dushan, Stephan Dechansky has smashed Bulgarian army in 1330. Meanwhile, he builds monastery in Dechany by which name he was nicknamed. Later ends in quarrel with his son and then he disappears from the throne. Rumors were that Dushan ordered his death.

Dushan was the most famous and the most powerful Serbian ruler ever. He built an empire and wanted to rebuild Byzantium to Serbian manner. Direct result of this was the Stephan Dushan proclaimed the Serbian Empire in 1346. During Dushan’s rule, Serbia reached its territorial, political and economical peak, proclaiming itself as the successor of the Byzantine Empire, and indeed was the most powerful Balkan state of that time. Tsar Dushan enacted the known Dushan’s Code, an extensive constitution, and opened new trade routes and strengthened the state’s economy. Serbia flourished, becoming one of the most developed countries and cultures in Europe. Medieval Serbia had a high political, economic, and cultural reputation in Europe. The Serbian identity has been profoundly shaped by the rule of this dynasty and its accomplishments, with the Serbian Orthodox Church who assumed the role of the national spiritual guardian.

Before his sudden death, Stephan Dushan tried to organize a Crusade with the Pope against the threatening Turks. He died in December 1355 at the age 47. He was succeeded by his son Urosh, called the Weak, a term that might also apply to the state of the empire which slowly slided into a feudal anarchy. This was a period marked by the rise of a new threat: the Ottoman Turk sultanate which spread from Asia to Europe. They conquered Byzantium and then the other states in the Balkans. 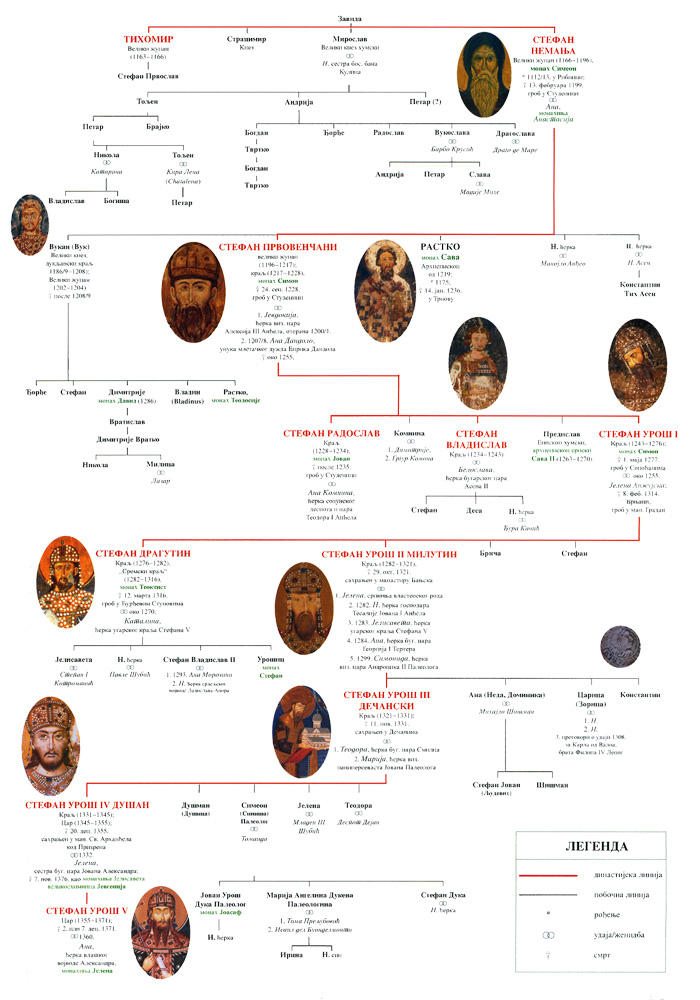